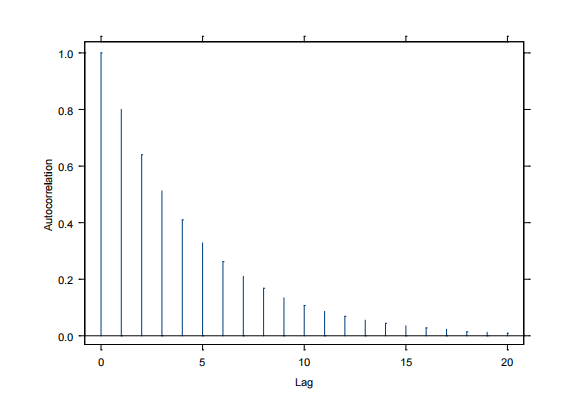 高级时间序列建模代写 This paper contains FOUR questions. Answer any TWO questions in total. If you attempt more questions than required,

Answer any TWO questions in total.

If you attempt more questions than required, only the required number of answers will be marked. Please strike through any answers that you do not wish to be marked. If you do not do this the marker will mark the answers in the order that they appear in your exam booklet(s).

Only University approved calculators may be used.

A foreign language direct ‘Word to Word’ translation dictionary (paper version) ONLY is permitted provided it contains no notes, additions or annotations.

Imagine that you are a financial sector expert at the International Monetary Fund. You have been given a monthly time series data for house prices for China. The sample period is 1980: January – 2010: December. Using this data, you are trying to understand if the housing price series depicts a stationary or non-stationary pattern. Answer now the following questions with adequate explanations:

(i) For a non-stationary time series, provide an interpretation of ‘shifting mean’ and ‘non-constant variances’ (with an example).  (10 marks)

(ii) Assume that for the housing price series you found an evidence of non-stationarity. Would adding more observations to the series (for instance, gathering more data before 1980: January) help ameliorate the problem of non-stationarity? (10 marks)

(iii) What would be the likely effects of a structural break in the house price series in terms of non-stationarity or stationarity? Explain. (10 marks)

Assume that the housing price series (Ht) is described by the following process:

Consider the results presented in Tables One and Two:

In the table, the house price series is denoted as ‘H’, ‘Constant’ denotes a constant or intercept term, ‘@TREND’ denotes a linear trend, ‘D(.)’ denotes a first difference and negative figures in brackets denote a lag of the specified length. The residual sum of squares for the models estimated in Tables One and Two are 0.0505 and 0.0400 respectively.

(i) Discuss in detail the Augmented Dickey-Fuller test, illustrating your answer by testing for the presence of a unit root in H at both 1% and 5% levels of significance. (20 marks)

(ii) Test the joint hypothesis of the presence of a stochastic trend and the absence of a deterministic trend in H at the 5% level of significance. (20 marks)

(a) You have been given a three variables system (Housing prices, Credit, and Interest rates) to study their dynamic interdependence pattern. Using Johansen procedure, present this three-variables system as a VAR system and discuss its properties with respect to short and long-run error adjustments. (50 marks)

(b) Assume that you have data for the three variables system (Housing prices, Credit, and Interest rates) for UK and have estimated a VAR system having 360 observations. The results are reported in Table Three: 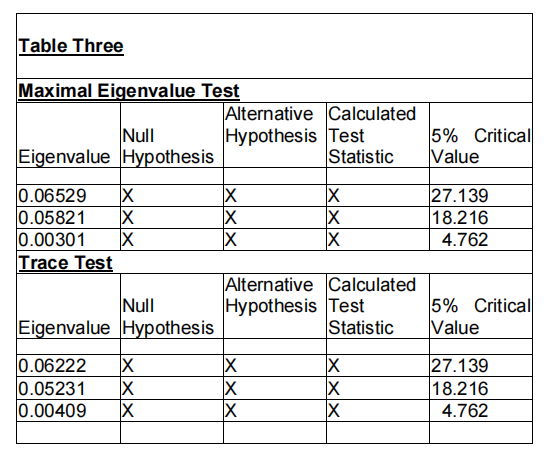 With reference to the results in Table Three, discuss in detail the Maximal Eigenvalue and Trace Statistics for testing cointegration relationship. State the missing terms denoted as ‘X’ and determine how many cointegrating relationships can be detected at the 5% level of significance using the maximal and trace tests. (50 marks)

(i) How do you test for the presence of a heteroscedasticity in time series data? With an example, show how might you test for its presence. (25 marks)

(ii) Assume that you are investigating the effect of inflation (Pt) on stock return (Rt) for the USA stock market. With respect to this relationship, describe how you would construct ARCH(1,1), GARCH(1,1), and Threshold GARCH(1,1) processes. (30 marks)

(iii) Show that a GARCH(1,1) can be expressed as an ARCH(∞) process. In empirical work, why researchers normally prefer to use a GARCH rather than an ARCH process? (25 marks)

(iv) A financial economist performed an estimation of an asymmetric GARCH for USA stock market return. The results are reported in Table Five.

(i) Express this AR(1) process as an MA(∞) process. What assumption would you make on a1 so that the AR(1) process is stationary. (30 marks)

(v) Study the ACF in Figure 1 derived from an AR(1) process. Comment if this process is non-stationary. (10 marks)