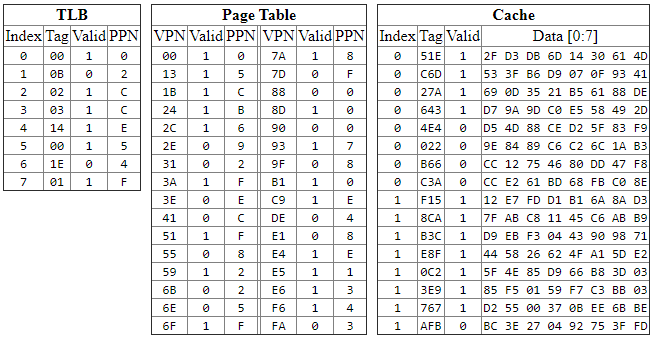 Suppose src1.c and src2.c are compiled and linked separately.  Determine if the following combinations of source files would cause errors, and if not, what would get printed.

Feel free to solve this problem by compiling the source files and linking them together.  If an answer is undefined, simply write “undefined” in the result box.

Given the following details about the memory system and the states of the TLB and Caches, fill out the following information for a request for the virtual address: 0x597A0

1.List all possible program outputs (just put a space between answers if there is more than one, leave empty if nothing can be printed, 5pts):

2.Will there be any zombies after this program runs? (yes or no, 2pts)

For the following multiple choice questions, select all that apply.  Ie. if none of the answers are correct, simply leave the question blank.  (2pts each, no partial credit)

What is the difference (or differences) between a TLB and on-chip cache?

a. The TLB is direct-mapped, while caches are set associative.

d. The TLB can be slow, but caches need to be fast.

Say we have two mutexes, implemented with binary semaphores, and two threads which access them.  Which of the following can cause deadlock:

a. The threads lock the mutexes in the same order.

b. The threads lock the mutexes in a different order.

c. The threads unlock the mutexes in the same order.

d. The threads unlock the mutexes in a different order.

Which stack protection techniques are vulnerable to return-oriented programming?

a. It increases the memory utilization due to less internal fragmentation.

b. It increases the memory utilization due to more coalescing opportunities.

c. It increases the throughput due to smaller free lists.

d. It increases the throughput due to better temporal locality in caches.

After a fork(), to access which datastructures should the resulting two processes synchronize?

What’s the purpose of the calling convention?

Which of the following statements about C datatypes for x64_64 is true?

Which of the following do not necessarily involve exceptional control flow:

b. Killing a process

As you reach the later stages of the exam, you may notice your mind becoming a jumbled pile of mixed metaphors.  Sort yourself out by finding 10 words related to this course in the mess of letters below.

Rules: Words must be contiguous, and they may be forwards or backwards and either horizontal or diagonal.  One example is given “thread”, but don’t count this one!  Don’t list extra words, or we won’t grade the question. : ) 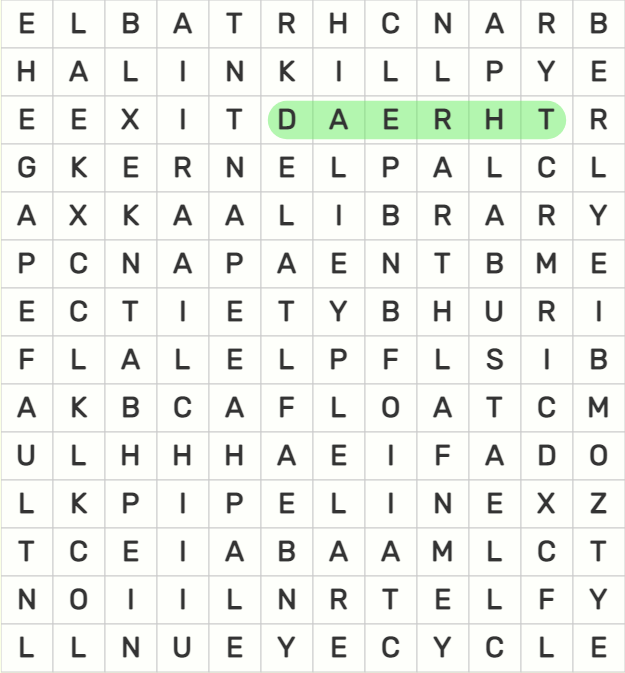 Suppose we want to create a soulmate simulator, where we randomly compare exactly two people to see if they should be soulmates. For fun, let’s represent each person as a thread.  We will call the “meet” function with many threads, and they will “mingle” to see if they are soulmates.  The only important thing for this problem, is that there should only be two threads in the mingle() function at one time.

1.Examine the “Wrong Code” Above.  In as few words as possible, why can’t it guarantee that only 2 threads are in the mingle function at the same time? (3pts)

2.Using a counting semaphore, complete the code on the right to guarantee that only 2 threads are calling mingle at the same time. (6pts)

Think about the following two cases of “overlap” between aspects of the virtual memory system.

1.Overlap of Variables -> Cache Lines:It’s possible to imagine that a single primitive variable (eg. int,float,char) could “straddle” two different cache lines.  (ie. if it starts at the end of one cache line, and is long enough to proceed into the next cache line).
This complicates the hardware, because a single access to a variable from the CPU has to combine the information from multiple cache lines (yuk!).  However, unless you are messing about with pointer arithmetic, this does not happen in C.
In as few words as possible, what aspect of the C language prevents a single primitive variable (ie. int, float, char, pointer, etc.) from being mapped to multiple cache lines? (2pts)

2.1. In as few words as possible, list one reason why, if this was possible, it would complicate the hardware or software for address translation. (2pts)

1. What string will diffuse this phase? (4pts)

2. What string will enter the secret phase? (4pts)