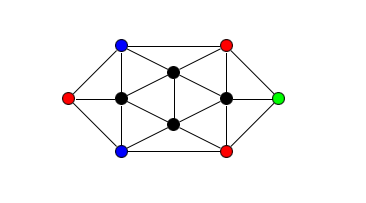 In how  many ways  can the numbers 0 through (2n – 1) be arranged in 2 rows of length n in such a way such that each row and each column is increasing? Examples (with n = 5):

Hint: What kind of vertebrate do you get when you apply Joyal’s bijection on a function like this?

The chromatic polynomial of a graph G is the function PG(k) that gives the number of ways to color the vertices of G using k colors, such that no two adjacent vertices have the same color.

d）Solve the recurrence above to nd a short expression forPCn (k).

In this problem, we investigate the edge-chromatic number χE(Kn) of complete graphs Kn.

The goal of this problem is to prove some of the many cases of the 4-colors theorem. Let our four colors be: red, blue, green and yellow.

Assume that the 4-colors theorem is proven for all planar graphs with less than n vertices and that G is a graph with n vertices that contains the following subgraph. 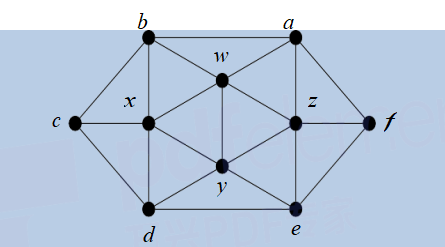 We remove the four vertices w, x, y, z in the middle, resulting in a smaller planar graph, and let the induction hypothesis give us a coloring of the six outer vertices a, b, c, d, e, f . We call such a coloring a con guration. Then…

a）Suppose that the induction hypothesis gave us the following con guration. Conclude that G is4-colorable.

b）Suppose instead that we have the following con guration. Use the Kempe-Chain argument to modify the coloring on G so that you can complete it and conclude  that G is4-colorable.

c）Now, say that the induction hypothesis gave us the following con guration. Use another Kempe-Chain argument to modify the coloring in order to end up with the coloringin part (a) or (b). Deduce that G is 4-colorable again in that case.

Note: Now you have a fairly good idea of how the 4-colors theorem was originally proved. The idea is to build a tree (actually, a forest) of con gurations that are reducible to one another by a Kempe-Chain argument, so that the leaves of this forest can be completed directly like in (a). The issue is that the forest built by Appel and Haken’s program has 1936 nodes rather than just the 3 nodes you just checked, which is why the help of a computer was required.