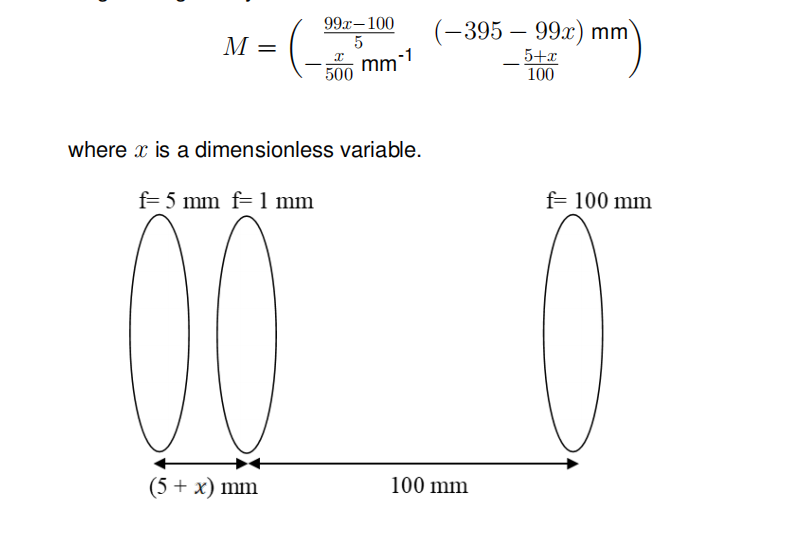 光学代写 ANY CALCULATOR Answer two questions. If you answer more than two questions, credit will only be given for the best two answers.

Answer two questions. If you answer more than two questions, credit will only be given for the best two answers.

Assume a beam with a radius of 1 mm is passed through the system. What is the radius of the output beam for the value of x you have just calculated?

(c) Assume that x can vary but it is restricted to values that keep the focus of the system at least 10 m away from the last lens. If R is the ratio of the diameter of a parallel input beam and the diameter of the output beam at the position of the last lens, what range of values of R can be achieved?

Note: Only allow values of x which keep the middle lens in between the other two lenses and include the possibility of a virtual focus.

(a) A beam of light that is linearly polarised in the vertical direction is passed through a quarter wave plate. Sketch the output polarisation state when the fast axis of the wave plate is at angles of 0, 22.5, 45, 90 and 135 degrees, making clear the orientation of the fast axis in each case.

(b) Another method of manipulating polarisation is Faraday rotation. Explain what property this has when compared to other phenomenon, such as optical activity. That enables the construction of a Faraday isolator.

(c) Calculate the smallest value of magnetic field that would provide the required rotation for a Faraday rotator being used in a Faraday isolator, when using light with a wavelength of 632 nm and a 1 cm long crystal of terbium gallium garnet (TGG). The Verdet constant of TGG at 632 nm is given by V = 134 rad T−1m−1.

(d) Explain how the Verdet constant would vary with the wavelength of the light if the circular birefringence was not dependent on wavelength.

(e) Based upon this dependence, calculate the percentage of light that will be transmitted for unpolarised light of wavelength 689 nm that is input backwards through a Faraday isolator that is using a magnetic field chosen for 632 nm light.

(b) An acousto-optic modulator (AOM) is often used to provide fast optical power switching of laser beams with high optical extinction. A transducer is being used to excite a sound wave with a frequency of 80 MHz in an AOM crystal. In order to deflect an 800 nm wavelength beam of light by 11.2 mrad under first order diffraction. Calculate the speed of the sound wave in the crystal and use this to determine the switching time for an input collimated beam of diameter 1 mm.

Note: you may assume that all of the optical power is contained within the beam diameter and that the switching time is set by the time taken for the sound wave to transit this diameter.

(c) Calculate the switching time for the system in (b) when the AOM is instead placed at the focal point of a 0.005 numerical aperture lens being used to focus a collimated beam, assuming that the beam diameter at the crystal is set by the diffraction limit of this lens.

(d) When altering the beam size using the method proposed in (c), explain what you would expect to happen to the optical power that has been diffracted into the first order diffraction beam. Both in terms of the total power in that order and the spatial distribution across the beam in the far field.